Vikki crosses the finishing line at the Steyning Stingers 2017 Half Marathon.

Congratulations to station member Vikki Buckle for running not one, but two Half Marathons on behalf of Radio Redhill!

Vikki’s first run was the (all uphill) Steyning Stingers on the 5th March, where she came in at approximately 2:43 (hrs); she then also went on to complete the Hampton Court Half Marathon on the 19th March, beating her previous time by coming in at 2:16 (hrs).

Speaking to Sian Wallis on the Sunday Colour Supplement earlier this month, Vikki said that this was the first time she had ever run a half marathon, having only become a runner in September last year (click here and listen to the conversation at 30 minutes into the programme ).

Not only that, but she managed to reach her target of £300 through sponsorship! All the money raised will be going to Radio Redhill to help us keep providing radio programming to the staff and patients of the East Surrey Hospital.

Well done Vikki, and a huge thank you from all here at Radio Redhill! 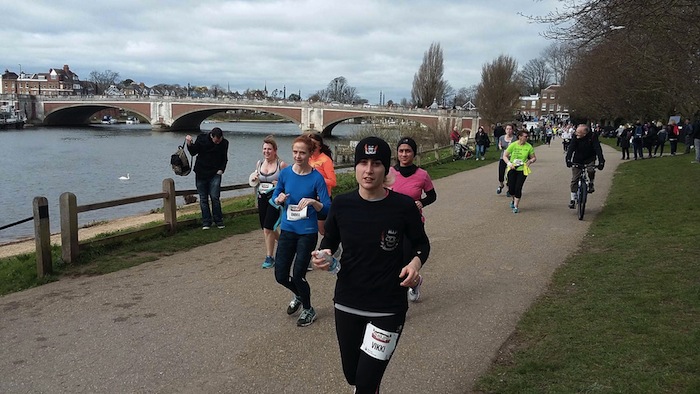 Vikki on the run at Hampton Court.

If you would like to be involved in supporting the station in any way, please click here.