Radio Redhill was the brainchild of the late Les Fowler (pictured below) and his son Andrew and was founded in November 1974, with the first experimental broadcast taking place on the following Christmas Day. Regular programmes to patients of Redhill General Hospital started in February 1975, initially on Saturday evenings. 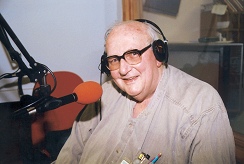 The studio in those early days was on top of a filing cabinet in the chapel vestry and the station boasted six members. The equipment consisted of a couple of tape decks, a microphone and a four-channel mixer.

Radio Redhill stayed in the chapel vestry for five years until, in the autumn of 1980, Loctite (UK) Ltd donated their demonstration caravan to the station. Although this cost several thousand pounds to equip, it was big enough to create two small studios inside. Comedy actor Melvyn Hayes visited to cut the ribbon and a new stage in the station’s history was born.

With the opening of Phase One of the then new East Surrey Hospital a few years later, Radio Redhill acquired some space on the first floor in which to build a studio and broadcasting from both hospitals began. The late Jean Metcalfe performed the opening ceremony for the new studio on February 16th 1985.

After the closure of Redhill General Hospital in 1991 (and with it the caravan) and the opening of Phase Two at East Surrey Hospital, a new studio was built. 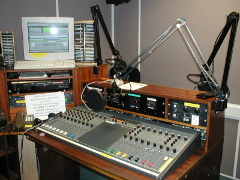 In 1992 Radio Redhill was selected to be the first hospital radio service in the UK to work with the Radio Authority and the Department of Trade & Industry to establish the feasibility of FM broadcasting for hospital radio — an experiment that was even mentioned in the House of Commons!

Since then the station has gone from strength to strength. Twenty-four hour broadcasting was successfully introduced in 1998 and then, in 2000, the station’s silver anniversary year, came the introduction of AM (medium wave) broadcasting.

Two years later our Phase Two studio had to move due to the expansion of NHS dentistry at East Surrey Hospital. We were fortunate to have been given our current excellent ground floor studio, specially constructed for hospital radio use, which was officially opened by June Snowden, President of the Hospital Broadcasting Association on May 12th 2002 (pictured below). 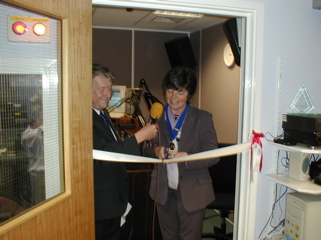 2005 was an important year for Radio Redhill as it won Gold in the ‘Station of the Year’ category of the national Hospital Radio Awards. The station celebrated its 30th Birthday by broadcasting on FM for a period in April to the whole of Redhill, Reigate and the surrounding area.

In 2010 Radio Redhill celebrated its 35th Birthday by another fortnight of special programmes in April. This time our programmes went out for the first time online and thus could be heard all over the world. This proved very successful in that patients, their friends and relatives and staff could now hear programmes on their computers or mobile phones as well as the usual methods. So a decision was taken for Radio Redhill to go permanently on line from July that year.

OFCOM (the UK broadcast regulator) invited stations to run trial FM transmissions for a period of one year from September 2021. Radio Redhill was granted one of these trial licences and now transmits to the hospital on 100.4FM. The sounds and reception quality is far superior to the AM signal.

From those early days of using some basic equipment, we now have two studios with digital editing and computer playout systems. The signals are routed between studios and the various systems that make up the broadcast chain in high quality digital audio bringing you the best possible sound quality.

Radio Redhill membership currently stands at around 70 volunteers of all ages and from all walks of life but with one common purpose — a commitment to provide a service to its hospital listeners that no other station, however local, can offer.