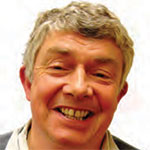 Richard ‘Rick’ Roberts is a retired librarian from Whyteleafe who has found himself once again in the library world as he has now taken over the reins as Radio Redhill Librarian from Catherine Reali.

Apart from music and broadcasting, his interests include amateur dramatics and he regularly performs with the Parlour Players at Sanderstead and the Pantoloons who produce a pantomime each January in Purley.