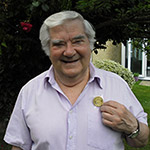 Born in Wales, it is hardly surprising that Irwyn loves the sound of male voice choirs and watching rugby. Educated in North Wales and Oxford, he made his career in Special Education until taking early retirement.

Irwyn worked with hospital radio in Twickenham and has been with Radio Redhill for over 25 years. Additionally, he has contributed to Brighton Festival Radio and the Talking Newspaper for the Blind.

Irwyn was a highly commended runner-up in the Presenter of the Year Award at the Hospital Radio Awards 2002, and his weekly ‘Out and About’ programme has won many Hospital Broadcasting Association awards. He has also been recognised for his community work.